Portland, Oregon (May 7th, 2022) — Comikey is pleased to announce the launch of ten new series’ from SOZO Comics.

All-new comics are now available to read on the Comikey website, as well as the Company’s iOS and Android app.

Summary: In this world, powerful creatures named Enemonsters have taken up residence. When one of these Enemonsters gets defeated, it transforms into a coin with immeasurable power—power that can be used to save a country, to bring about change, or simply... to win a high-speed race??
Meet Turbo, a Coinmaker, and Retra, a racecar driver. These two are bound by fate to save mankind. All they have to do is collect the “The Ultimate Seven” coins, win all the races, and become the best Coinmaker there is. Sounds easy enough, right? Are they in it to win it, or will they stall out?
From the creator of Yu-Gi-Oh R and Cardfight!! Vanguard comes this new comic from Akira Itou.

Summary: It’s not every day that you wake up naked on a beach with no recollection of who you are or where you’re from. Especially not in a world controlled by four emotion-harboring stones… Marin however, decides that has nothing to do with her. Nope! She’s going to pick herself up and make the best of it. She joins a band and quickly becomes a popular dancer. And when her group gets invited to headline a month-long event, she’s obviously ecstatic! However, things take a turn for the worse when Marin witnesses a man steal one of the four sacred stones. Now, all of the wrong people are after her!

Summary: Qi is on the brink of war with its neighbor country, Zhou. Thankfully, one man is brave enough to stand up and defend the kingdom of Qi: Gao Changgong, Prince of Lan Ling. Unfortunately, his uncle is the emperor of Qi—and is, among many other things, a cruel tyrant. Gao Changgong will have to choose: between family, or his kingdom.

Summary: From the creator of  FINAL FANTASY, Yoshitaka Amano's new comic. In a world led by brute force, and bloodshed, Zan stands alone. He has no knowledge of who he is, or why the world is in constant moral decay. That is, until he’s visited by a mysterious woman who claims to have all of the answers. With her help, Zan embarks on a quest to uncover the truth of his identity and the fate of the world.

Summary: Egwin is just trying to make his way through life in the most comfortable way possible. Lounging around, forgetting basic things… It’s a cute slice of life that’s also just so relatable.

Summary: Meet Suutan, a bunny suffering from poor mental health. In this dark comedy, she faces depression, plastic surgery, shopaholism, a gaming addiction, insomnia, unsociability, anxiety, psychiatrist appointments, self-harm, and more. She's a frail spirit, so try not to get her too worked up!

The Warrior Demigods, Champions of Sparta

Summary: In Ancient Greece, an infant boy is cast aside by the Spartan empire for being weak—too weak to even cry. But his bad luck becomes good fortune when a peasant man decides to raise him. A decade later, the Spartans find the boy once again. This time, he shows promise to become a strong warrior.

The Most Tsundere Boss in History

Summary: Most of the famous women in history were known to be strong, ruthless, and unyielding. Jeanne d’Arc was a powerful martyr. Florence Nightingale literally saved lives with her medical prowess. But what if they were still alive today, and they were… tsundere! These lovely ladies would gladly order you around, and look great while doing it! It’s up to you to decide which historical tsundere will reign supreme!

Summary: Monstrous creatures called the Ugomeki have invaded Earth. The only way to stop them from destroying the world? Teenage girls, of course! However, these are NOT your typical teenage girls. After all, they can transform into the best defensive weapons known to man! The only issue? They not only have to maintain a balance in their everyday lives, but they also have to learn how to control their newfound autonomy! Will they be able to save the world in time for dinner?

Summary: Meet three girls, Fumi: the technologically equipped magical girl; Silvia: a smooth “criminal” type who doesn’t play by the rules; and Laurie: the headstrong, guns blazing leader. Together, they form the Guardy Girls! Whether it’s a bank robbery, monster attack, or just dealing with the Secret 3, the Guardy Girls are on the case!

Founded in 2020, Comikey Media Inc. is a free website and app for reading all of your favorite Manga, Manhua, Manhwa, and Webtoons in English. From action and romance to isekai, discover new free stories to binge every day! Read simulpub chapters of officially licensed comics, plus support creators and publishers by reading your favorite series on Comikey. 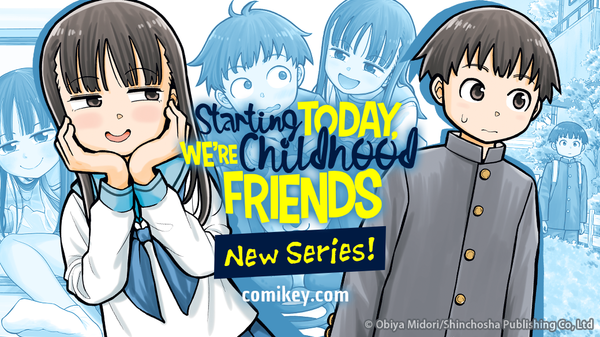