Portland, Oregon (May 27, 2022) — Comikey is pleased to announce the launch of four new comics available Sunday, May 29, 2022. They are “The Princess of Blue Roses,” (青薔薇の姫) from Compass Inc., “Midnight Dogs,” independently published, “On a Leash,” from Soran Books, and “Evenly Matched Love,” from Manhuatai.

Additionally, Comikey has officially released all the Manga ONE titles it localizes on its mobile app globally! Readers can now enjoy popular titles like Kengan Omega and Völundio Divergent Sword Saga from their phones, on the go, or from the comfort of their own homes. Not only that, readers can read 6 chapters PER DAY, PER SERIES for free by simply logging into the app, and watching ads.

The Princess of Blue Roses

Summary: On the day of her execution, Vyaria wakes up to find time has reversed itself, making her seven years old again. Thinking of the events of her future, she is truly traumatized. Her first marriage to King Cain had been a cold and unhappy one. Each time she made an attempt to get closer to him, she had been faced with rejection, and the sudden appearance of a girl from another dimension had only increased Cain’s hostility towards Vyaria. Behind her back, everyone had called her the “Princess of Blue Roses,” after the flower that symbolizes unattainable wishes.

Knowing she would eventually be sentenced to death by her own husband, Vyaria is terrified when she is once again united with the young Cain. Is everything going to repeat itself? Is there really nothing she could do to change the future?

As scared as she is, Vyaria vows to fight against her cruel fate in this second chance at life…!

“We wanted somewhere where we could be at peace. You know, start over.”

In this world, there is an ability known as "channeling", the capacity to manipulate certain objects at will. Isaac, Milo, and Rex—three young veterans from the recently finished War of The Archangels—rent a room in the pawnshop of a certain Serena, located in the suburban district of Kennel City. They hope to move on from conflicts from their past and start a new life, regardless of how hard this might be.

Tensions run high on the battlefield as soldiers fight through death. Bombs rain from the sky and bullets pepper the ground. In battle, beasts screech through the sky and tear through the earth. After the smoke clears, the soldiers return to their human forms weary from battle and numbed by death. But amid the explosions and chaos, a spark of passion ignites. Time will tell whether it can survive the horrors of war, or if it will succumb to it.
By: Aji
Publisher: Soran Books
Categories: GL, Animals, Romance

Magic, mecha, mana, demon foxes, and space travel. There’s a lot that’s unique about Mu Yunshen’s world. Most interestingly... both women and men can become pregnant. Of course, Mu Yunshen doesn’t know about this last little detail—yet. After he saves the life of young master Aslan and spends the night with him, Mu Yunshen ends up with the shock of his life: twins.

Mu Yunshen escapes to his home world and raises the twins as a single parent. But what will he do once his former master Aslan finds him and his children once again??
By: Hungry Studio, Měizīzī
Publisher: Manhuatau [Tomansha]
Categories: BL, Romance, Fantasy

Comikey first announced the partnership with Compass in July 2021 with the release of “My Engagement Was Called Off Under False Accusations, but Who Ever Said My Face Was Ugly Beneath the Mask?”. The Company plans to release new chapters weekly and aims to catch up with the Japanese release schedule, after which it will switch to a simultaneous publication schedule.

The Company plans to launch even more titles in the coming weeks. All comics are available to read on the Company’s website, as well as its mobile app—on both iOS and Android.

Founded in 2020, Comikey Media Inc. is a platform for reading all of your favorite Manga, Manhua, Manhwa, and Webtoons in English. From action and romance to isekai, discover new free stories to binge every day! Read simulpub chapters of officially-licensed comics, plus support creators and publishers by reading your favorite series on Comikey—now available for download on both iOS and Android. 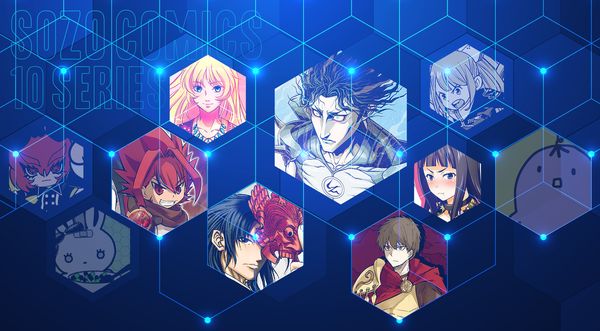 All-new comics from SOZO Comics are now available to read on the Comikey website, as well as the Company’s iOS and Android app.